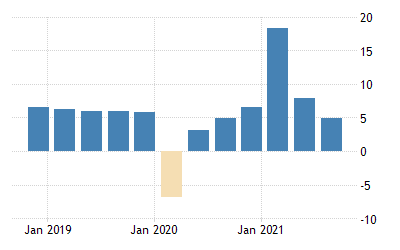 Deng Xiaoping introduced the agricultural reforms in 1979. The economic reforms of China started with agricultural reforms. In the first seven years of reforms, output increased by 5% annually. This ratio was 1.5% higher than the pre-reform period. One of the most amazing features of these reforms was the spillover effect. After the reforms, non-agricultural activities started increasing. As a result that, the gross output value of TVEs increased and was recorded at 24%. At the same time, employment also increased at a 9% annual rate (Huang, 2010). These reforms benefited a lot of Chinese farmers. Since then, this sector of the Chinese economy has been witnessing a high level of growth.

China has also reformed its trade regime in 1979 as a part of economic developments. It has kept its door wide open for the world economies over the last twenty-five years. We can divide Chinese trade reforms into three important aspects:

Chinese WTO accession is the starting point of the fourth era. Liberalization and privatization of many sectors is another aspect of trade reforms. Apart from this, China is adopting The Open Door Policy for foreign trade. Like the agricultural sector, this sector of the economy also saw huge growth.

In the same year, china introduced state-owned enterprises reforms. The goal of these reforms was to improve enterprise performance. These reforms aimed to improve the efficiency and quality of economic growth. In the last 16 years, two general assumptions have been developed. Those are:

This policy enabled the government to take full control of the industries. It is one of the major reasons that help China to witness massive economic developments.

It is another major reform of the Chinese economic developments. Financial system reforms involve the liberalization of interest rates. Apart from this, it includes liberalization of quantitative restriction. Such restrictions include credit and exchange controls. It also included different measures to improve the efficiency of the financial sector. There are three goals of these reforms, and those are:

As told by a dissertation help firm, the Chinese financial sector is a complex and multifaceted process. It involves the balanced development of three essential elements. Those elements are institutions, instruments, and markets.

Labor reforms signalled a major shift from the socialist system. It gave the right to work, employment, and welfare to the urban workforce. These are the three major components of the labor system. Full-time employment was a hallmark of the socialist economy. The state had to control the demand and supply side of the labor market. In 1979, the Chinese government introduced labor reforms. The main purpose of these reforms was to accommodate the unemployed youth of the country. With these reforms, the economy boosted while giving equal employment opportunities to its youth.

Since 1978, the country has experienced rapid economic growth and social development. It has increased the well-being of the Chinese population. In the same year, China introduced income distribution reforms. These reforms aimed to provide equal income to the labor workforce. But, this reform failed miserably. Over the past few decades, income inequality in China has increased. There is a significant income difference between rural and urban areas of China.

One Belt One Road:

One belt one road is a global infrastructure economic developments strategy. The Chinese government introduced it in 2013. The Chinese government invested in nearly 70 countries and organizations.  This project will help the Chinese government to gain more power in the region. Central Asia will be the epicenter of the Chinese powers. It will help China to connect with eastern and western markets. It will also help China to earn more profits. Combining all these benefits, this single project will benefit a lot. These days, Central Asian countries are economically isolated. With Intra-regional trade, they are making up only 6.2 percent of total trade. With the help of this project, this figure will increase. But, it is China that will rule the global economy. This single economic project will give China an advantage over other leading economies.